Trees or Peatlands: A False Dichotomy?

In the third instalment of our Directors’ blog, professional ecologist Andy McMullen questions the anti-tree orthodoxy of peatland conservationists.

In Scotland, there can be an unfavourable attitude towards trees near peatlands.  Some wariness is understandable following planting of the unique Caithness & Sutherland peatlands with non-native conifers in the 1970s & 1980s.  However, comparisons with Scandinavia suggest that wooded bogs & transitions are unusually rare or absent habitats in Scotland.  Furthermore, in other countries, restoration of peatlands is now being efficiently integrated with additional habitats, including woodland, through recognition of their interconnections.

As well as the loss to biodiversity, a lack of woodland also leads to some of our peatlands being undermined by the rivers that flow through them.  This has been recognised by the New Forest Wetlands partnership, for example, where a visionary project to reconnect hydrological links between bogs, rivers & woodland is ongoing.  This is achieved by ‘lifting’ & returning the rivers to their original course and, ultimately, reinstating natural processes.  Ecosystem services are also enhanced, such as increased flood mitigation and carbon storage.

Numerous outcomes are therefore achieved in the New Forest by focusing on an integrated approach to the cause of ecosystem decline, not just the symptoms.  A striking demonstration of the natural river function being restored to the New Forest is available in this short video by the Wild Trout Trust.  Please watch it if you have ‘2 mins’ to spare, as it is a beautiful demonstration of how a river functions according to contemporary hydrologists.  Note, too, the integral importance of debris (the same eroded features present in the Scottish images below), and the simplicity of the potential solutions.

Similar problems & opportunities to those in the New Forest are evident throughout Scotland, where riparian mire habitats, such as tall herb fen & carr woodland, are disproportionately impacted, as well as bogs.  However, a 20th Century modular approach (and viewing of rivers as drains) is being applied to restoration instead.  For example, in response to the potential restoration of rivers alongside peatlands, Peatland Action have responded to state that: “both SNH and SEPA would not want the artificial raising of the [burn] channels using logs and debris.  We would suggest instead channel blocking with dams and bank reprofiling”; or “we wouldn’t want timber fill added to modified water courses. I’ve spoken with SEPA too.  This is too risky for debris releasing downstream. Please instead offer normal composite damming plans…”.

This is frustrating because the historical route of “modified watercourses” usually lies evident above the excavated & straightened river-bed.  Addressing restoration with the hard engineering of plastic & timber dams misses a golden opportunity, creating instead a highly modified habitat using manufactured materials & structures.  Returning salmon, for example, then have to ‘hurdle’ the dams only to discover that their spawning grounds have been so modified by the damming that their journey was fruitless.  Dams negatively impact other species too and are associated with impacts on ecosystem services, including increased emissions of greenhouse gases.

Considerable maintenance issues are also posed by damming rivers, especially during spates when dams may be bypassed if the peat or riverbed yields instead.  As a result, considerable peatland erosion may be precipitated to further frustrate SNH & SEPA’s questionable aim of maintaining rivers free of debris.  Furthermore, the removal of dams is expensive and it creates additional environmental problems, should we decide to restore our rivers to a more “natural condition” in the future.

There is, therefore, considerable foresight demonstrated by initiatives such as the New Forest Wetlands Partnership, which aim to create self-sustaining systems.  These are as capable of failure as dams, but crucially these systems can be reintegrated, following failure, without costly investments of time, machinery and materials.  The Rottal Burn restoration in Glen Clova, in which salmon spawned within months of completion, is a good example of the potential for ecological river restoration in Scotland.  Woody debris was proven to be vital to its success.

Integration of woodland is an obvious necessity in the New Forest, but a productive one, in light of the widely recognised role that wood has in maintaining riverine form & function; and ultimately, the health of related peatlands & wetlands.  While the Scottish landscape is more open there is, as described above, the additional potential to restore rare or absent wooded habitat types to our country by re-integrating them alongside peatland.

Unfortunately, resistance to trees by peatland conservationists limits such integration and the related benefits for biodiversity and society.  For example, Peatland Action’s concerns for one restoration site are that, “in 10 years the hydrology and vegetation might have re-established sufficiently on the bog to allow tree planting adjacent without potential ill effect…it would become a complete thicket of birch”.  This comment addresses two misplaced woodland concerns while overlooking their solution.  For example, birch produces seed at around 15 years old and is most productive at between 40 – 70 years.  The same is true of other wetland colonist trees.  As a result, woodland can be established now to provide biodiversity and ecosystem benefits with a 10 – 15 year window remaining for restoration of the associated peatland in freedom from tree seed.

It is also possible to manage woodland regeneration so that the feared extreme of a “thicket” is not the only outcome.  Furthermore, many bogs remain free of trees despite their proximity to woodland and this is true of the site in question, which has been flanked by a plantation for over 40 years, and by alder & birkwoods for millennia.  The key factor in resisting tree colonisation is the peatland’s condition and, as such, observations can be used to develop site-specific management approaches instead of creating a simplistic, and false, dichotomy of ‘trees = bad’.

Understanding the current baseline and changes in our peatlands, including the threat from trees, is complicated by the regulatory failure to receive or archive data for the future (as revealed by a recent ‘Freedom of Information’ request).  This is a consequence of the unavailability of file-sharing services and an inability to accept email attachments of more than 8 MB.  Frustratingly, just one A3 map can be over 8 MB in size.  As a result of such challenges to data-sharing, fundamental observations are lost and necessary questions will remain unanswered, which will almost certainly frustrate peatland management into the future.

A cancel culture also limits Scotland’s progression in modern environmental principles, as well as claims to be “beyond the science”.  This exclusivity and sense of being ahead leads to a poor experience for staff who are then not exposed to traditional scientific approaches or are constrained by fear of censure.  In contrast, the Pennine PeatLIFE project states upfront their foundation on approaches developed throughout the UK and Canada; and their increasing use of online fora and wikis to openly share information and critiques.

Comparison with these holistic approaches, which integrate habitats, science, technology and even the psychology of surveyors, further reveals that we need to be much more ambitious in Scotland.  For example, we could repurpose “Peatland Action” as “Carbon Action” and develop a multidisciplinary, scientific culture that reflects recent progress in environmental science and technology.  “Carbon Action” could include staff with expertise in GIS, computing and telecommunications, as well as in rivers, peatlands, farming and forestry, with the intention of developing holistic projects of wider relevance to Scotland than just the distribution of peatland.

This would also bypass the perceived primacy of peatland, and the ensuing orthodoxy that acts unproductively against rivers, woodlands, individuals, and even the adoption of contemporary techniques.  All of these have the potential to contribute to the wider project of ecological restoration in Scotland, and by employing them all we may be able to create something greater than the sum of its parts – interconnection and system complexity are key, after all.

Ultimately, it should an easy choice between conserving a decades-old, misplaced approach to peatland conservation, and adopting a more holistic, forward-looking and sustainable one. Restoring and re-integrating all of our available habitats with up-to-date approaches will produce by far the best outcomes for all of us in Scotland (and beyond!).

Our latest Directors’ blog is by NatureScot’s Woodland Officer, Kate Holl, who has co-authored a best practice guide on how to establish common woodland plants in broadleaved woodlands. For more information on the recent publication, Read more…

Our latest Directors’ blog is a guest article by independent film-maker Ross Harrison, whose latest video Forgetting Nature will be released on Wednesday 17th March. In this post, Ross discusses his rationale for making the Read more… 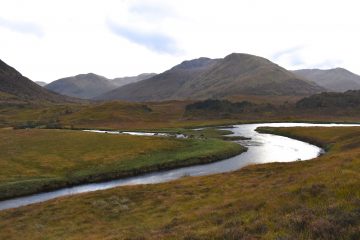 Of Riparian Trees and Fish and Fire

Our latest Directors’ blog is a guest article by Peter Cunningham, an aquatic biologist who has lived and worked in Wester Ross since 2001. In this article, he looks at the role of riparian woodlands Read more…